Trimetazidine’s distinctive mechanism of action gives Martin Pharmaceuticals the ability to engineer a potential line of medicines for use across a spectrum of acute, life-threatening, and/or rare conditions.

LIVANTRA’s lead indication is for the treatment of Acute-on-Chronic Liver Failure (ACLF).

ACLF is a syndrome characterized by acute decompensation of chronic liver disease in combination with organ failures, resulting in high short-term mortality. The greater the number of organ systems involved, the higher the mortality rate. Despite current aggressive medical management, mortality at 30 and 90 days in ACLF remains high, ranging from about 50% in milder cases to nearly 80% in patients with 3 or more organ system failures.

Medical management is often viewed as a bridge to transplantation, but many patients do not qualify for transplantation due to age and co-morbidities. Furthermore, demand for donor livers greatly exceeds the supply - 50% die before getting a transplant.

A therapy that helps patients to survive ACLF without transplantation or allows patients to live long enough to receive a new liver, would be a game-changer.

Martin has several US and international patents pending covering various aspects of the use of LIVANTRA in ACLF.

In March 2018 Martin Pharmaceuticals received Orphan Drug Designation from the US FDA for the use of LIVANTRA in ACLF.

LIVANTRA’S MECHANISM OF ACTION IN ACLF

As the liver generates energy to perform its myriad functions, toxic molecules, called reactive oxygen species, are generated. These molecules can damage individual liver cells (hepatocytes) in an already-injured liver, leading to their death.

LIVANTRA shifts the generation of energy in the liver from fatty acid oxidation to glucose oxidation so that fewer of these toxic molecules are produced. As a consequence, there is less damage to individual hepatocytes, leading to less hepatocyte death. Additionally, LIVANTRA is hypothesized to preserve cellular energy, leading to increased ATP (cell fuel) levels in hepatocytes. Being able to maintain a good energy balance is important for hepatocytes under the stress of ACLF.

Data from an initial study of 133 ACLF patients in an investigator-initiated study demonstrated a remarkable reduction in mortality attributable to trimetazidine.

At 30 days, trimetazidine-treated patients had a significantly greater survival rate versus standard of care: 81% (trimetazidine) vs. 51% SOC; p=0.015 (Kruskal-Wallace Test). 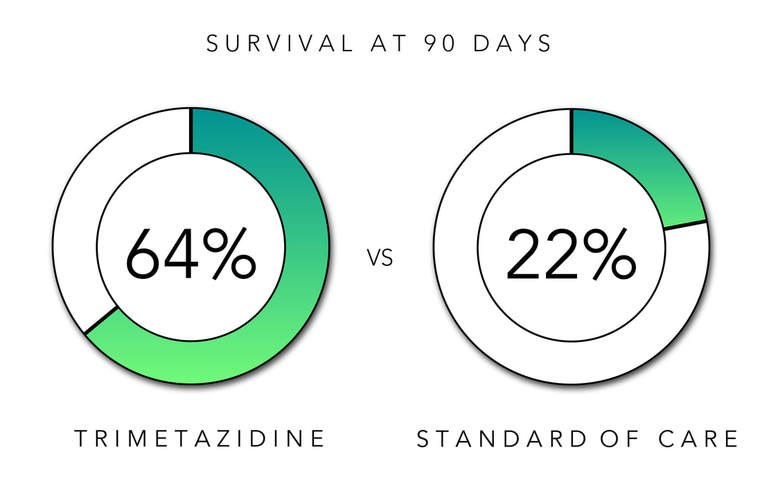 Additionally, this survival benefit was accompanied by significant improvement at 30 and 90 days in the MELD score (a prognostic score used when listing patients for transplant) as well as significant improvement in markers of the liver’s ability to perform its normal functions (total bilirubin, albumin levels, and clotting factors).

LIVANTRA’s second indication is for the treatment of Pulmonary Arterial Hypertension (PAH).

PAH is a progressive, life-threatening disorder. PAH is a complex vascular disease resulting from a proliferative vascular remodeling that obstructs the lumen of pulmonary arteries thereby increasing vascular resistance. In an effort to compensate, blood pressure intensifies in the pulmonary artery. Ultimately, the increased blood pressure can damage the right ventricle of the heart, leading to right ventricular hypertrophy (RVH), making it difficult for the heart to pump blood through the lungs to be oxygenated.

It is estimated that somewhere between 35,000 to 60,000 people in the U.S. are living with PAH. Current therapies aim to reduce symptoms and improve quality of life. Despite improvements in patient management, mortality rates for PAH remain high. The National Institutes of Health Registry has reported a 3-year mortality rate of approximately 50%.

In August 2018 Martin Pharmaceuticals received Orphan Drug Designation from the US FDA for the use of LIVANTRA in PAH.

LIVANTRA’S MECHANISM OF ACTION IN PAH

Evidence suggests that the pathogenesis of PAH is related to the inappropriate activation of the master regulator hypoxia inducible factor 1 (HIF-1).  HIF-1 is normally up-regulated and/or stabilized under hypoxic (inadequate oxygen supply) conditions when, among other activities, it reduces oxidative metabolism of the cell and shifts metabolism to glycolysis, which does not require oxygen.  This has the effect of allowing the cell to produce ATP – the cellular energy currency – in a reduced oxygen environment.

More oxygen-efficient energy production is not the only consequence of increased levels/stabilization of HIF-1 additionally, it induces a protrophic (pro-growth) and anti-apoptotic (anti-cell death) state, which prevents cells from dying and in fact causes them to grow and divide.

In PAH, where HIF-1 is improperly up-regulated (not due to a lack of oxygen) it is believed to be responsible for the high rate of growth and low rate of death which manifests as hypertrophy of the vascular endothelium as well as the right ventricle, central features of the disease.

LIVANTRA has the ability to reverse this state. LIVANTRA inhibits the oxidation of fatty acids and fatty acid oxidation turns off a key enzyme in glucose metabolism called pyruvate dehydrogenase (PDH). PDH controls whether glucose is fully oxidized to produce energy or part of the carbon backbone is preserved and used to create the building blocks that allow cells to grow and divide – simplistically whether the building blocks are used for building or burned for energy. In PAH, PDH is turned down, favoring cell proliferation, resulting in the hypertrophy characteristic of PAH.  LIVANTRA turns PDH back up, which causes the building blocks to be used to make energy, rendering them unavailable to be used for growth. Thus, LIVANTRA can promote remodeling of the vascular and cardiac architecture that is responsible for progression of PAH.

NON-CLINICAL DATA INDICATES LIVANTRA’S EFFECTIVENESS
​
Trimetazidine has been shown to be effective in two standard animal models of PAH, the chronic hypoxia (CH) and monocrotaline (MCT) models.  Both of these models involve establishing PAH and then treating and reversing it, thereby mimicking treatments of humans.

In the CH model, mice were placed into chambers with 10% oxygen (normal air is 21% oxygen) for three weeks, which induces PAH.  The CH experiment used normal mice and engineered mice that lack an enzyme called malonyl-CoA decarboxylase (MCD-/- mice). MCD-/- mice are resistant to PAH because β-oxidation is permanently impaired, which alleviates the Randle cycle inhibition of PDH, promoting glucose oxidation and reducing the proliferative and anti-apoptotic state underlying PAH.

After three weeks, trimetazidine was administered for a three week period.  Relative to control CH mice, trimetazidine significantly improved mean pulmonary arterial pressure, reduced right ventricular thickness and improved exercise performance.  The functional performance, in particular, improved to a level comparable to the MCD-/- mice, who do not develop PAH and are thus reflective of untreated controls. In addition, pulmonary arterial wall thickness and architecture of trimetazidine-treated normal CH-animals was more comparable to non-CH controls than untreated normal CH-animals.

In the MCT model, rats were treated with MCT using standard protocols for three weeks to induce PAH.  After establishing PAH, one group of animals was treated with trimetazidine and another was treated with vehicle for an additional three weeks; a non-diseased control (no MCT treatment) was also included as a reference.  As expected, trimetazidine-treated MCT animals showed significant improvements versus controls, including reduced pulmonary arterial pressure, reduced pulmonary artery thickness and right ventricular thickness.